A fond farewell and a new beginning

Early in the Fall, we said our fond farewells to Alex Ciappara who served as the chair of the TOAF board since 2016. This was a chapter in which TOAF went through monumental transformations to deepen the impact on the community we serve. This required a tight-knit collaboration between the team and the board. We’d like to share our deepest gratitude to Alex for his sustained commitment and contributions to TOAF. We will miss your optimism and team-player spirit!

TOAF is entering yet another new chapter — having manifested itself as an agile and resilient platform during the pandemic, with exponentially growing impact and activities. We are thrilled to welcome Jini Stolk, a celebrated and pivotal art leader in Toronto's cultural sector, as the new Board Chair of Toronto Outdoor Art Fair.

Cheers to an exciting future of collaboration and new visions! 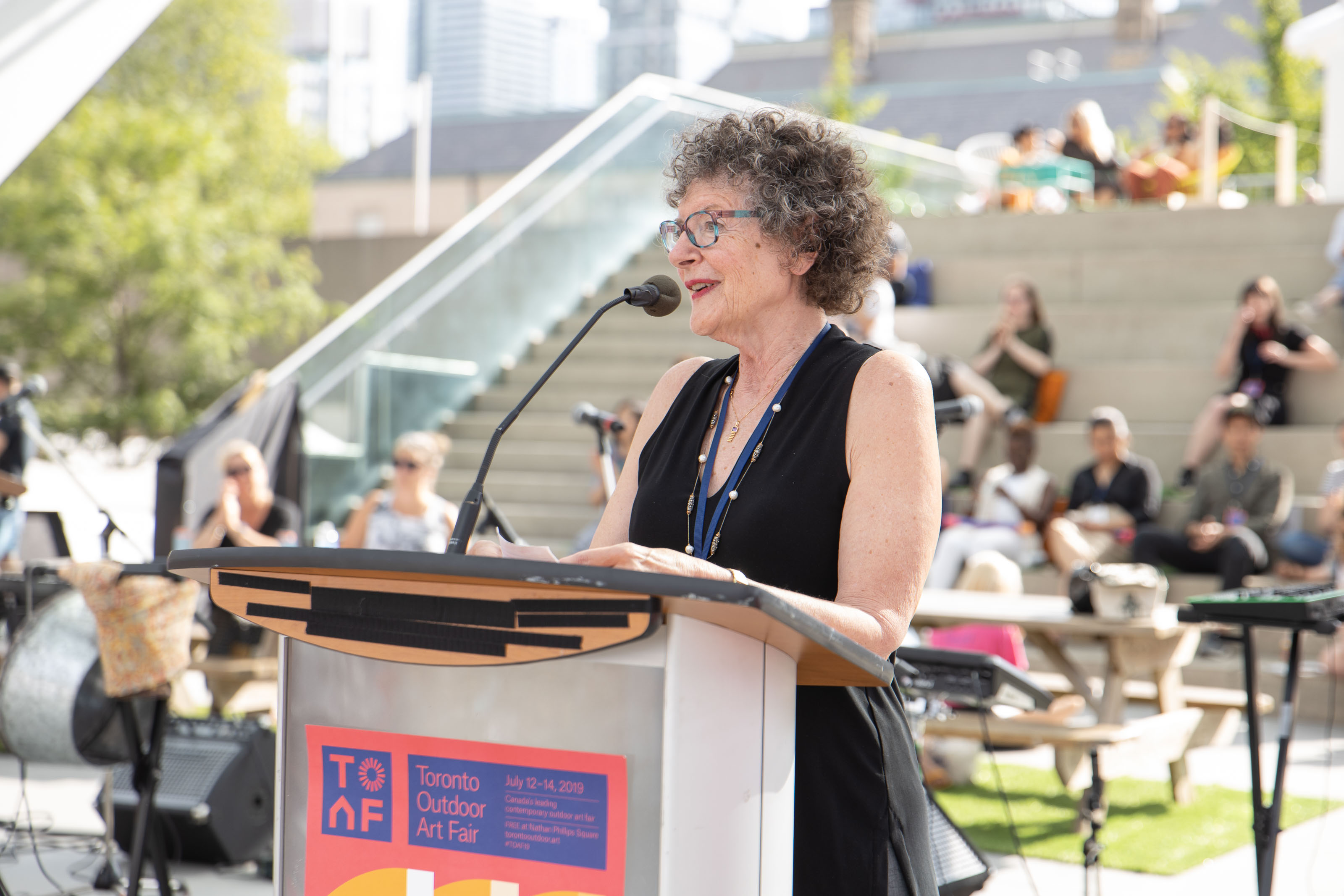 We asked Jini about her involvement in the visual arts...

People may be more used to seeing me at theatre or dance openings, but my first job in Toronto was managing the printmaking workshop at Open Studio. I have always felt deeply connected to visual arts and artists, and it felt very natural to re-engage with this community when Anahita and Alex asked me to join the TOAF board in 2018.

What Jini loves the most about TOAF

What I love about the Toronto Outdoor Art Fair is the joy of discovery, and the ability to talk to the artists whose work makes you catch your breath and makes your heart beat just a bit faster. Amazingly, much of that experience continued as TOAF went so beautifully and successfully online over the past two years — but like everyone else, I am incredibly excited about being back on the Square in 2022. And I’m very proud of the pop-up exhibitions and installations that we started and will continue presenting until then — we’ve been able to offer a welcome taste of TOAF even during the pandemic.

The other thing I love about TOAF is that it embodies a continuum, an unbroken line of exceptional artists interpreting their times, place and experiences for over 60 years. TOAF itself feels partially like a tribute to the Elders in our community, those who’ve cleared the creative path in past years, along with the new generation who are exploring and continuing the journey. Artists have always been entrepreneurial and the pandemic has made that an essential part of art-making. I love the way TOAF encourages and supports artists without creating structures or gateways between them and the people who are moved by their art. Anahita says that we are "Un-walled" — and I think that adds a special spark to immersing yourself in and learning to trust your instincts about art.

What brought her to the board...

I joined the board, of course, because of Anahita — one of the smartest, most creative and courageous arts leaders I know. But beyond that I had been noticing the change at TOAF: communications were brighter and more engaging, new ideas were flowing, artists, fair-goers, collectors, and funders were responding, and suddenly, a very established organization — an essential and respected part of Toronto’s arts scene — was beginning to feel like the newest, most vibrant company around! I wanted to be part of that energy, and do what I could to help it thrive.

How does she see her role as the new chair...

TOAF is entering a new phase of growth and impact, the board’s role also changes. Because of my long experience running and sometimes starting arts and other non-profit organizations, being on a large number and variety of boards, and researching and teaching about governance in the arts (most recently as the Lead of Toronto Arts Foundation’s board network Creative Champions), I would like to help ease the way to our new future, leading my smart and committed board colleagues in a way that supports, protects and connects TOAF as it evolves. Together, I hope that we can help TOAF succeed at its important mission in providing impactful opportunities for artists to launch and sustain their creative practices. 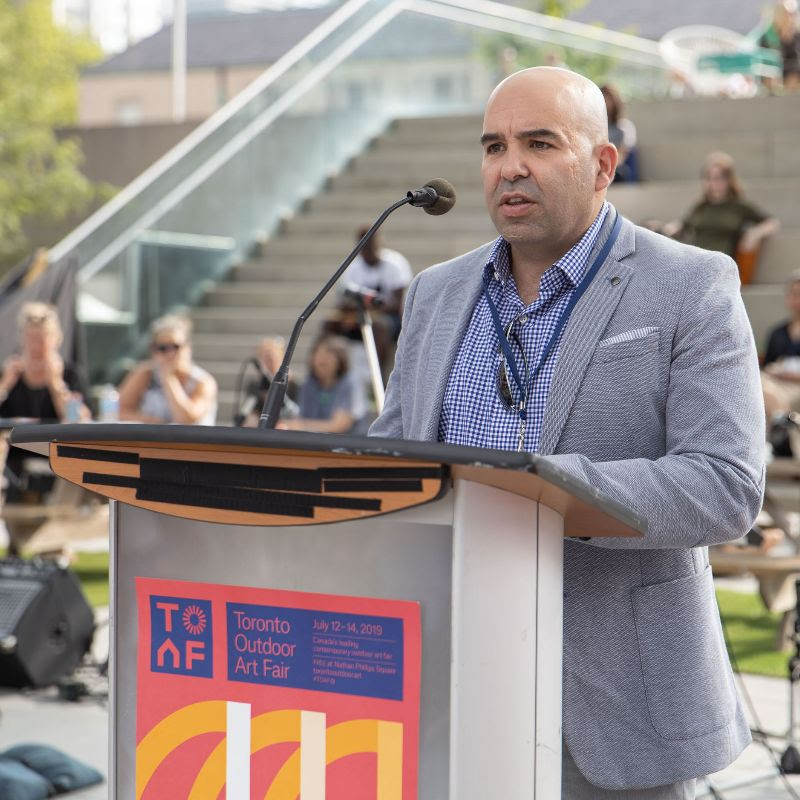 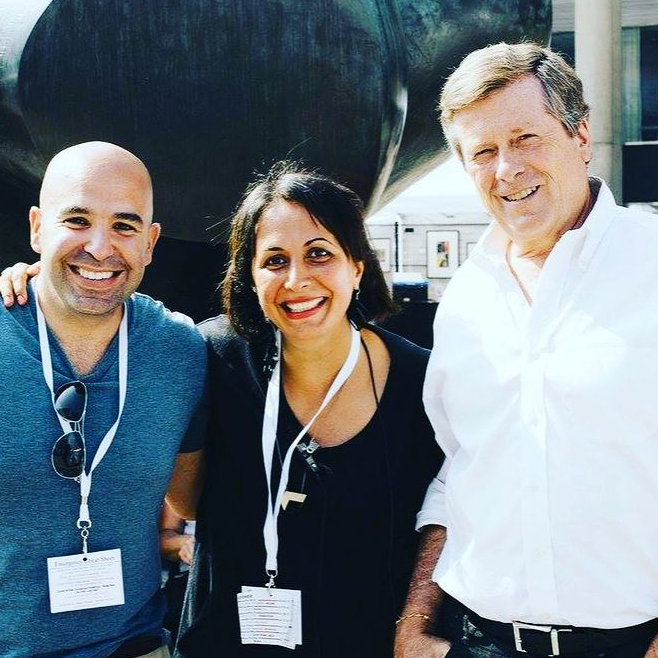 What brought you to TOAF?

When I first started out, I often described TOAF as an organization with a long and proud civic history that had a ton of potential but with a start-up mentality to help get it there.  And I loved the idea of applying my skillset to help it reach its potential.

TOAF has a prominent civic and business history.  Murray and Marvelle Koffler as well as Alan Jarvis and Jack Pollock created it, Isadore Sharp helped launch it and Nathan Phillips Square hosted it alongside the assistance of municipal, provincial and federal leaders.  And yet, gradually over the years, the organization had drifted away from that history.

Under the leadership of my predecessor Judy Josefowicz, a strategic plan was developed to address that drift.  I was attracted to the fact that an organization with such a long history was willing to question how it conducted things in a way that start-ups usually do.  And I was excited about contributing to TOAF in that sort of environment.

I love serving the community of artists and giving back to the city of Toronto.  Sometimes we forget how fortunate and privileged we are to be living in Toronto – it’s safe, cultural, and full of opportunity.  Knowing that I was contributing to an event that is important to so many fellow citizens and that contributed to the creative fabric of the city really motivated me.

As for what kept me up at night, it was my early days and months on the Board when I was still figuring out how I could contribute and whether I was doing enough to help the organization.

What are you most proud of during your time at TOAF?

I’m proud that we had the patience to manifest our vision to make TOAF a more aligned, resilient, and professional organization.

There were a lot of unexciting yet extremely important foundational behind-the-scenes governance issues that we really needed to address before implementing the more exciting, outward improvements on-the-Square and organizationally for the artists and the general public.  These improvements included a better layout on the Square, larger awards prizes, stronger partnerships, new logo and branding, and more events throughout the year, among many, many other things.

What are your most fondest memories of your time at TOAF?

Definitely the three days on the Square every year.

The team at TOAF would work hard all year to organize the show and I loved seeing the culmination of these efforts.  The Fair an annual celebration of artists and the creativity that is alive and well in Toronto.  I loved meeting and chatting with members of the general public and the artists whether it was after the Opening Ceremonies, with a Henderson beer in the beer garden, or under the white tents surrounded by colourful and evocative art.  And I loved taking the feedback and making improvements to the Fair to do it all over again the following year.

How is TOAF serving the community?

TOAF helps to launch, promote and sustain the careers of artists, while hosting a signature event that highlights the importance of art to Torontonians and visitors.  It is also integral to making art accessible to so many citizens.

And you see this in the numbers – hosting over 360 artists annually and 20,000 artists in its history while attracting 130,000 art lovers and collectors and encouraging the purchase of over $2 million on art sales.

What do you wish for the future of TOAF?

For TOAF to carry on this momentum.  For TOAF to be the world’s leading outdoor and contemporary Art Fair showcasing the best of what Toronto and Canada has to offer.  And for TOAF to be considered a signature creative event for the city much like the Toronto International Film Festival (TIFF).

anahita azrahimi and Alex Ciappara, with an artwork by Susan Gale